CD26, or dipeptidyl peptidase 4 (DPP-4) is a membrane-associated peptidase of 766 amino acids that is widely distributed in numerous tissues. DPP-4 also exists as a soluble circulating form in plasma and significant DPP-4-like activity is detectable in plasma from humans and rodents. To review the biological importance and therapeutic relevance of DPP-4 see DPP-4 and Diabetes or DPP-4 inhibitors: Clinical data or DPP-4 Loss of function models or DPP-4 and GLP-2 or DPP-4 and immune function or DPP-4 and the Cardiovascular System

DPP-4 (CD26) exerts its biological effects via two distinct mechanisms of action. First, as a membrane-spanning protein, it binds adenosine deaminase and when activated, conveys intracellular signals independent of its enzymatic function via dimerization and activation of intracellular signaling pathways. The signaling properties of membrane-associated CD26 have been most extensively characterized in T cells. CD26 associates with several membrane proteins, including CD45, CXCR4. For an overview of the immunological actions of CD26, see DPP-4 and immune function

The second principal biological activity of CD26 (DPP-4) is its enzymatic function. The enzymatic activity of CD26 is exhibited both by the membrane-spanning form of the molecule, and by the slightly smaller circulating soluble form. DPP-4 prefers substrates with an amino-terminal proline or alanine at position 2, but may also cleave substrates with non-preferred amino acids at position 2.

The structure of GIP, GLP-1 and GLP-2 reveals a highly conserved alanine at position 2, rendering these peptides ideal putative substrates for the aminopeptidase DPP-4.

Observations from a number of laboratories originally delineated the importance of DPP-4-mediated inactivation of GLP-1 as a key determinant of GLP-1 bioactivity. Degradation of GIP and GLP-1 by DPP-4 was reported by Mentlein and colleagues in Dipeptidyl-peptidase IV hydrolyses gastric inhibitory polypeptide, glucagon-like peptide-1(7-36)amide, peptide histidine methionine and is responsible for their degradation in human serum. Eur J Biochem. 1993 Jun 15; 214(3):829-35

Subsequent studies confirmed that DPP-4-mediated inactivation of these peptides is a critical control mechanism for regulating the biological activity of both GIP and GLP-1 in vivo in both rodents Degradation of glucose-dependent insulinotropic polypeptide and truncated glucagon-like peptide 1 in vitro and in vivo by dipeptidyl peptidase IVEndocrinology 1995 136(8):3585-96  and humans Degradation of glucagon-like peptide-1 by human plasma in vitro yields an N-terminally truncated peptide that is a major endogenous metabolite in vivo. J Clin Endocrinol Metab. 1995 Mar;80(3):952-7 and Both subcutaneously and intravenously administered glucagon-like peptide I are rapidly degraded from the NH2-terminus in type II diabetic patients and in healthy subjects Diabetes. 1995 Sep;44(9):1126-31

DPP-4 inhibition prevents the degradation of active GLP-1 but does not increase the levels of circulating total GLP-1 and does not prevent the kidney from rapidly clearing GLP-1. DPP-4 inhibition also acutely decreases L cell secretion of GLP-1, likely via negative feedback on the L cell, as outlined below

Studies in the dog demonstrate that although the levels of intact non-degraded GLP-1 and GIP are preserved and increased following treatment with the inhibitor NVP-DPP728, the levels of total circulating incretins (degraded plus intact peptides) actually decreased, for both GLP-1 and GIP. The mechanism underlying this observation remains unclear, but feedback inhibition on the K or L cell remains a possibility. See Preservation of active incretin hormones by inhibition of dipeptidyl peptidase IV suppresses meal-induced incretin secretion in dogs. J Endocrinol. 2002 Feb;172(2) :355-362.

Although GIP is clearly a substrate for DPP-4, GIP is still substantially degraded in pigs in the presence of DPP-4 inhibitors such as Val-Pyr, suggesting the importance of non-DPP-4-related mechanisms in the degradation of intact GIP. See Dipeptidyl peptidase IV inhibition reduces the degradation and clearance of GIP and potentiates its insulinotropic and antihyperglycemic effects in anesthetized pigs. Diabetes. 2001 Jul;50 (7): 1588-97

Immunocytochemical studies highlight the intimate relationship between DPP-4+ blood vessels and the gut endocrine cells that produce both GLP-1 and GLP-2.

The rapid inactivation of these peptides by DPP-4-mediated cleavage poses important challenges for therapeutic efforts directed at enhancing GIP and GLP-1 activity in vivo.

Strategies designed to circumvent DPP-4-mediated inactivation of GLP-1 include the generation of modified GLP-1 molecules engineered to exhibit DPP-4-resistance. Several reports have documented the enhanced biological activity of such molecules in both normal and diabetic rodents. The lizard GLP-1-related peptide exendin-4 has a glycine in position 2, rendering the peptide resistant to DPP-4-mediated degradation. This likely contributes significantly to the enhanced potency and stability of exendin-4 in vivo. Glucose-lowering and insulin-sensitizing actions of exendin-4: studies in obese diabetic (ob/ob, db/db) mice, diabetic fatty Zucker rats, and diabetic rhesus monkeys (Macaca mulatta). Diabetes. 1999 May;48(5):1026-34

Inactivating mutations of CD26 in mice and rats

Complementary evidence for the importance of DPP-4 in incretin metabolism and glucose control is found in studies characterizing the phenotype of the CD26/Dpp4-/- knockout mouse. Despite the putative importance of DPP-4/CD26 for immune function, these mice develop normally with only a modest immune phenotype. Glycemic excursion is significantly reduced however, in association with decreased degradation of both GLP-1 and GIP and increased levels of insulin. This mouse defines an essential role for DPP-4 in the control of incretin degradation and glucose homeostasis. See Enhanced insulin secretion and improved glucose tolerance in mice lacking CD26. Proc Natl Acad Sci U S A 2000 97(12):6874-6879

A subsequent study from Nagakura and colleagues Improved Glucose Tolerance via Enhanced Glucose-Dependent Insulin Secretion in Dipeptidyl Peptidase IV-Deficient Fischer Rats. Biochem Biophys Res Commun. 2001 Jun 8;284(2):501-6 characterized the enteroinsular axis in a Japanese strain of the DPP-4 rat (F344/DuCrj). These investigators found enhanced glucose tolerance, increased insulin, and enhanced levels of glucose-stimulated GLP-1, consistent with the findings from the DPP-4-knockout mouse Enhanced insulin secretion and improved glucose tolerance in mice lacking CD26. Proc Natl Acad Sci U S A 2000 97(12):6874-6879. The reasons for the different results obtained by the Japanese versus the Vancouver groups are not clear, but may be due to different experimental methodology, and a slightly different strain of the DPP-4-mutant rat.

Although DPP-4 is clearly a critical molecule for inactivation of GLP-1, GLP-2, and GIP, a major question surrounding the emerging use of DPP-4 inhibitors, primarily for the treatment of diabetes, relates to the potential effects of these inhibitors on immune function. DPP-4/CD26 is expressed on T cells, plays a functional role in T cell activation, and activation of CD26 sets in motion a well-defined signaling cascade in the T cell. CD26 associates with CD45, and modulation of CD26 activity is frequently associated with enhanced T cell proliferation. A key question for the diabetes therapeutics field is the relationship between partial inhibition of the enzymatic activity of DPP-4 using selective inhibitors, versus the potential effect of and importance of a critical level of enzymatic activity for T cell signaling. At present, there is insufficient data to make sweeping generalizations about what long term effects various inhibitors of DPP-4 enzymatic activity might have on T cell signaling and immune function. For an overview of how CD26 signals in the T cell, including its interactions with CD45, see CD26-mediated signaling for T cell activation occurs in lipid rafts through its association with CD45RO Proc. Natl. Acad. Sci. USA, Vol. 98, Issue 21, 12138- 12143, October 9, 2001  and DPP-4 and immune function

A biological role for soluble DPP4 (sDPP4) has also been proposed, with a focus on its actions to promote inflammation in immune cells A potential role for dendritic cell/macrophage-expressing DPP4 in obesity-induced visceral inflammation Diabetes. 2013 Jan;62(1):149-57 and Soluble CD26/Dipeptidyl Peptidase IV Enhances the Transcription of IL-6 and TNF-α in THP-1 Cells and Monocytes PLoS One. 2013 Jun 21;8(6):e66520. Moreover levels of sDPP4 rise with development of obesity and sDPP4 directly impairs insulin signaling in fat and muscle cells ex vivo Dipeptidyl peptidase 4 is a novel adipokine potentially linking obesity to the metabolic syndrome Diabetes. 2011 Jul;60(7):1917-25

A susbtantial proportion of circulating sDPP4 appears to originate from the bone marrow compartment in rats Soluble DPP4 originates in part from bone marrow cells and not from the kidney Peptides. 2014 Jul;57:109-17 and in mice, specifically from lymphocytes Lymphocytes are a major source of circulating soluble dipeptidyl peptidase 4 Clin Exp Immunol. 2018 Nov;194(2):166-179

Similar observations, namely a link between hepatocyte DPP-4 and both liver and adipose tissue inflammation were observed subsequently by Varin and colleagues. Nevertheless, while targeting hepatocyte DPP-4 markedly reduced DPP-4 activity, circulating levels of sDPP4 were not diminished. Although DPP4 has also been touted as an adipokine, most adipose tissue DPP4 originates from stromal vascular cells, and elimination of adipocyte DPP-4 had no major metabolic phenotype. Moreover, using multiple genetic mouse models of DPP-4 deficiency, circulating levels of sDPP4, whether reduced or absent, did not correlate with markers of inflammation in adipose tissue, liver, or the circulation. Furthermore, treatment of mice with DPP-4 inhibitors rapidly induced plasma levels of sDPP4 2-3-fold, without induction of inflammation. These findings highlight the complexity of sDPP4 and the importance of the hepatocyte for biology linking sDPP4 to inflammation 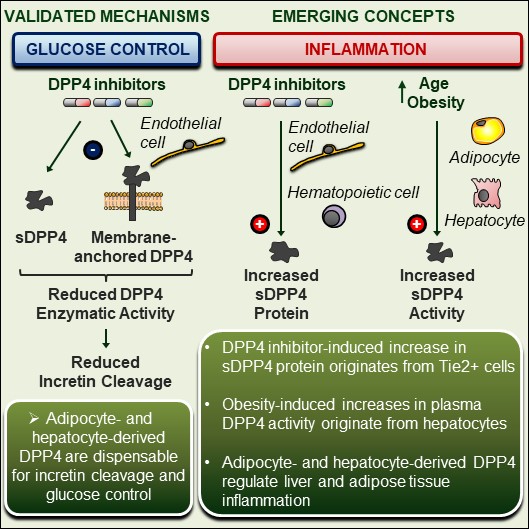 The Drucker Laboratory has also studied the biological importance of a related member of the DASH (Dipeptidyl peptidase IV activity and/or structural homologues) family of serine peptidase/prolyl oligopeptidase enzymes, Fibroblast Activation Protein. Brandon Panaor examined the consequences of chemical inhibition of FAP activity, or genetic disruption of the Fap gene in mice. FAP enzyme activity was reduced using a highly-specific inhibitor CPD60 and via CRISPR-mediated inactivation of the mouse Fap gene. Notably, CPD60 reduced plasma FAP activity and modestly improved oral and intraperitoneal glucose tolerance in a FAP-dependent manner. Nevertheless inactivation of the Fap gene did not improve glucose or lipid tolerance nor confer resistance to diet-induced obesity inmice

Watch Brandon Panaro describe his studies of FAP in a short video or read the paper Fibroblast activation protein is dispensable for control of glucose homeostasis and body weight in mice Mol Metab. 2019 Jan;19:65-74.