Vildagliptin has been evaluated in a diverse number of subjects with T2DM, including patients on hemodialysis 3x weekly for about 3 years due to diabetic nephropathy. Ito and colleagues examined the efficacy and safety of vildagliptin (30 patients) vs controls (21 patients) with T2DM and a mean starting HbA1c of 6.% in a prospective open label study. Criteria for adding vildagliptin included a HbA1c after either diet alone, or therapy with mitiglinide or voglibose for 8 weeks, greater than 7% or a glycated albumin level greater than 21%, as levels of A1c may be underestimated in patients with renal failure on dialysis. Vildagliptin was added on to the prior anti-diabetic therapy after the 8 week observation period. The dose was initiated at 50 mg/day for the first 8 weeks, with an option of uptitration if HbA1c targets were not achieved, with a mean final vildagliptin dose of 80 mg. Vildagliptin treated reduced HbA1c from 6.7 to 6.1% ove 24 weeks. No serious adverse events were noted. All 30 patients in the vildagliptin group received anti-diabetic therapy; 21 patients in the control group did not receive any anti-diabetic medications. The dipeptidyl peptidase-4 (DPP-4) inhibitor vildagliptin improves glycemic control in type 2 diabetic patients undergoing hemodialysis Endocr J. 2011 Sep 15. [Epub ahead of print

Evaluation of the efficacy of Vildagliptin over 24 weeks at different dosing levels, including 50 mg once daily, 50 mg twice daily, and 100 mg once daily, was carried out in previously untreated subjects with T2DM, mean starting HbA1c of 8.4%. The mean placebo-subtracted reductions in HbA1c were -0.5+/-0.2% (P=0.011), -0.7+/-0.2% (P<0.001), and -0.9+/-0.2% (in the 3 different dosing regimens, respectively). There was no significant reduction in body weight, no reported hypoglycemia and the incidence of adverse events was comparable in subjects receiving Vildagliptin or placebo. See Efficacy and tolerability of vildagliptin monotherapy in drug-naive patients with type 2 diabetes. Diabetes Res Clin Pract. 2007 Jan 11; [Epub ahead of print]

Analysis of the effects of vildagliptin given 100 mg once a day in the morning before breakfast, or in the evening before dinner was carried out in 48 patients with type 2 diabetes over 28 days. Only evening dosing produced significant improvements in fasting glucose. Both regimenrs were similarly effective in reducing 24h mean glucose exposure. The effects of the clinically approved 50 mg twice daily dose was not studied. See Hormonal and metabolic effects of morning or evening dosing of the dipeptidyl peptidase IV inhibitor vildagliptin in patients with type 2 diabetes Br J Clin Pharmacol. 2010 Jul;70(1):34-42.

Vildagliptin 50 mg twice daily exhibited efficacy when added to insulin in a 24 week study in patients not adequately controlled on insulin with HbA1c ranging from 7.5-11%. The mean reduction in HbA1c from baseline was 0.5% however hypoglycemic events were less common and less severe in Vildagliptin-treated patients. See Addition of vildagliptin to insulin improves glycaemic control in type 2 diabetes. Diabetologia. 2007 Mar 27; [Epub ahead of print]

The efficacy of Vildagliptin 50 mg daily in subjects with impaired glucose tolerance was examined in a 12 week study of 179 subjects with IGT, (2-h glucose= 9.1 mmol/l, A1C= 5.9%). Effects of the DPP-4 Inhibitor Vildagliptin on Incretin Hormones, Islet Function, and Postprandial Glycemia in Subjects with Impaired Glucose Tolerance. Diabetes Care. 2007 Oct 18; [Epub ahead of print]

Vildagliptin 50 mg once daily was also effective at lowering both fasting and postprandial glucose in subjects with impaired glucose tolerance as outlined in Effects of the DPP-4 Inhibitor Vildagliptin on Incretin Hormones, Islet Function, and Postprandial Glycemia in Subjects with Impaired Glucose Tolerance. Diabetes Care. 2007 Oct 18; [Epub ahead of print]

Analysis of the PK-PD relationships of Vildagliptin in 40 healthy subjects  demonstrated no significant differences in PK-PD relationships across a range of ages and BMIs, as outlined in The effect of age, gender, and body mass index on the pharmacokinetics and pharmacodynamics of vildagliptin in healthy volunteers. Br J Clin Pharmacol. 2007 Oct 24; [Epub ahead of print]

Similar findings, namely inhibition of glucagon and relative improvement in insulin secretion have been seen in MOA studies in subjects with type 2 diabetes treated with Vildagliptin 50 mg twice daily for 10 days. In contrast to data obtained with GLP-1R agonists, Vildagliptin had no effect on gastric emptying or the rate at which ingested glucose appears in the circulation. See Effects of Dipeptidyl Peptidase 4 Inhibition on Gastrointestinal Function, Meal Appearance and Glucose Metabolism in Type 2 Diabetes. Diabetes. 2007 Feb 15; [Epub ahead of print]

These mechanisms are consistent with those described in earlier studies of Vildagliptin action in subjects with type 2 diabetes in Twelve- and 52-Week Efficacy of the Dipeptidyl Peptidase IV Inhibitor LAF237 in Metformin- Treated Patients With Type 2 Diabetes. Diabetes Care. 2004 Dec;27(12):2874-80.

Patients with T2DM treated with Vildagliptin 50 mg bid for 4 weeks exhibited significant reductions in total and chylomicron-associated triglycerides, together with decreases in chylomicron ApoB-48 and chylomicron cholesterol. These findings suggest that DPP-4 inhibition may exert effects on intestinal chylomicron synthesis, perhaps through GLP-1, GIP, or an as yet undetermined mechanism. See Vildagliptin therapy reduces postprandial intestinal triglyceride-rich lipoprotein particles in patients with type 2 diabetes. Diabetologia. 2006 Jul 1; [Epub ahead of print]

An update on the Vildagliptin Phase 3 clinical trial program, including Abstracts presented at the 2006 IDF Meeting in Cape Town, was presented in a December 6 2006 Press Release, which addressed data including one versus twice daily dosing, tolerability, weight gain, and islet dysfunction.

Clinical Data for the Vildagliptin Phase 3 Program was presented in a series of presentations at the 2006 Meeting of the American Diabetes Association. In some studies, Vildagliptin was used at a dose of 50 mg twice daily; in other studies, the dose was 50 mg once daily. Vildagliptin was well tolerated with no major serious adverse event profile. The drug was studied as monotherapy alone, or when added on to  metformin. Among the interesting findings, Vildagliptin therapy increased the levels of GLP-1 and GIP in patients with both type 1 and type 2 diabetes. Vildagliptin therapy also produced favorable effects on lipid profiles, including reduction of triglycerides, in several studies. Vildagliptin produced a stimulation of insulin secretion after an oral glucose load, and Vildagliptin also improved insulin sensitivity after 6 weeks of therapy in patients with T2DM; evidence for improvement in the acute insulin secretory response to glucose and improved disposition index was also detected in a small 12 week study using Vildagliptin 50 mg b.i.d. To review the data see ADA 2006 Vildagliptin data

A Vildagliptin (Galvus) Phase 3 update was provided on January 19 2006. The Vildagliptin NDA filing in the United States was accepted on March 30 2006 as described in a Novartis Press Release

On November 28 2006, Novartis provided an update on the Phase 3 clinical program for Vildagliptin/Galvus, including new data on once versus twice daily administration, 2 year monotherapy data head to head against metformin, results for weight gain and blood pressure reduction, and a summary of the adverse event profile and the GLORIOUS outcome trial program. See Galvus November 2006 Update

Interim results for the Vildagliptin (Galvus) Phase 2 and Phase 3 Clinical Development Program were released by Novartis on September 20 2005 at their annual investor day. Vildagliptin appears to be safe, very well tolerated, and efficacious. To view the available data, see Vildagliptin Phase2/3 data.

In a Press Release and Investor Presentations on November 19 2003, Novartis released preliminary results of these 12 week studies. Vildagliptin was well tolerated and demonstrated surprising glucose-lowering potency both as monotherapy, and in combination with metformin. To review the Novartis LAF237 data released at the end of 2003, See Vildagliptin Phase 2 Data .

In studies presented at the 2004 meeting of the ADA in Orlando, multiple studies from Novartis and other research organizations examined the activity of LAF237 in both preclinical models and in human studies. In studies of patients with Type 2 diabetes treated with glyburide, addition of LAF237 for 28 days demonstrated that combination therapy was well tolerated, with no significant drug interactions noted.

A 12 week study of LAF237 in drug naive patients, Abstract 355-OR, demonstrated that LAF237 (25 mg, bid) reduced the mean ? HbA1c from baseline by -0.6 ± 0.1% and 47% of patients taking LAF237 reached an endpoint of HbA1c<7.0%. Moreover, the difference in HbA1c relative to PBO in the 24 LAF237-treated patients with baseline HbA1c?>8.0 and =9.5% (mean 8.6%) was ~1.2%. Both FPG and 4-h mean postprandial glucose decreased in patients receiving LAF237. Although both the 4-h mean postprandial C-peptide level and the insulin response corrected for peak glucose in patients taking LAF237 increased significantly relative to PBO, no other measure of ß-cell function was affected by LAF237. The % of patients in the LAF237 and PBO groups experiencing any adverse event (AE) or a suspected drug-related AE were 55.7% and 71.4%, and 15.7% and 10.7%, respectively. The most common AE in patients taking LAF237 was hypoglycemia: 7 patients (10%) had one or more hypoglycemic event; all were considered mild. Two events were classified as notable (PG =2.5 mM) and attributed to a missed meal or strenuous exercise.

Similarly, combination of LAF237 with metformin for 12 weeks was well tolerated in patients with T2DM as described in 354-OR, with significant reductions in glycemia and HbAic reported in this study.

A one year open label extension study of LAF 237 plus metformin was described in presentation LB-7. The study examined the 52-wk efficacy of LAF237 (50 mg, qd) in patients with T2DM maintaining a stable dosage of metformin (MET, 1500 to 3000 mg/day). The between-group difference in adjusted mean ?HbA1c at endpoint was 1.1 ± 0.2%, (P<0.0001). Treatment was generally well-tolerated: 76.2% and 89.7% of patients taking LAF/MET and Placebo/MET, respectively, completed the study. Body weight decreased by 0.2 kg in both groups. 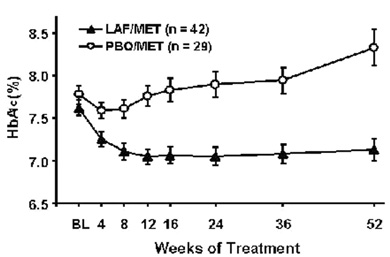 A head to head preclinicl study of the DPP-4 inhibitor Vildagliptin vs.  Vildagliptin, however there were no major differences in glucose or HbA1c, whereas plasma insulin levels were significantly higher in rats treated with Vildagliptin. Both Vildagliptin and β-cell mass compared to vehicle-treated candy-fed rats. Hence, both drugs appear to be reasonably potent controlling blood glucose, whereas GLP-1R agonists may be associated with reduced food intake and weight loss. See Liraglutide, a Long-Acting Glucagon-Like Peptide-1 Analog, Reduces Body Weight and Food Intake in Obese Candy-Fed Rats, Whereas a Dipeptidyl Peptidase-IV Inhibitor, Vildagliptin, Does Not. Diabetes. 2007 Jan;56(1):8-15